A plot of the light intensity versus time (the light curve) for the star EPIC 204278916. The star was observed for over 78.8 days with a 29.4 minute cadence. The first 15 days are plotted here, and show the light changing in intensity by over a factor of two. Astronomers used the ALMA telescopes to discover a circumstellar disk around the star, and offer several explanations for the dips including that they are caused by clumps of material in the warped inner portion of the disk. Credit: Scaringi et al. 2016


There are now about 2700 confirmed exoplanets discovered by transiting techniques including those used with the Kepler satellite. The transit method observes the stellar light curve (the flux versus time), and spots the slight dimming of starlight when an exoplanet crosses the face of the star as seen from Earth. The orbital period of the exoplanet can be determined from multiple transits, with the duration and details of the transit dip providing a measure of the planet’s size. Light curves actually monitor a number physical processes including some at the stellar surface (like sunspots) as well as in their surroundings. Periodic variability of the observed stellar flux has long been used to measure stellar rotation periods, for example; transiting exoplanets produce a characteristic shape in the light curve.

Variability in young stellar objects (YSOs) is also related to the presence of a protoplanetary disc. Material in the disc can intermittently obscure the central star, while the highly variable accretion on to the central star can also modify the emission from the system. The variability of YSOs is known to show different kinds of periodicities and symmetries that are possibly related to different environmental processes, from comets orbiting around the stars to variations in circumstellar material with occulting material located at the inner edges of a disc viewed edge-on.

CfA astronomer Luca Ricci and his colleagues serendipitously noticed such an effect in the light curves of the star EPIC204278916 seen with the extended Kepler mission (“K2”). Its irregular light dimming appears to be due to one of these environmental possibilities. For about twenty-five days the light from the star, a young, low-mass “M” dwarf star, underwent unusual and large irregular fluctuations, dimming by as much as sixty-five percent. The astronomers then used the ALMA radio array to spot evidence of a tilted disk around the star, confirming their original suspicions. Their careful analysis of the light curve concludes that it is consistent with a warped inner disk, inclined to the line-of-sight by about fifty-seven degrees and containing dark clumps of material in circular orbits; an alternative possibility is a collection of cometary debris in an eccentric orbit. Future observations will further constrain these choices, but the results emphasize the wealth of information about stellar systems (not only the stars themselves) that can be extracted from light curves. 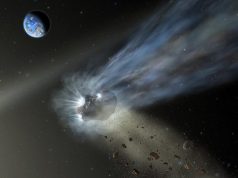 Volcanic eruptions, not natural variability, were

During the past 25 years astronomers have discover

A new path toward sending and receiving informatio

Western butterfly populations are declining at an

The genome editing technology CRISPR has emerged a

The collapse of Northern California kelp forests will be hard to...