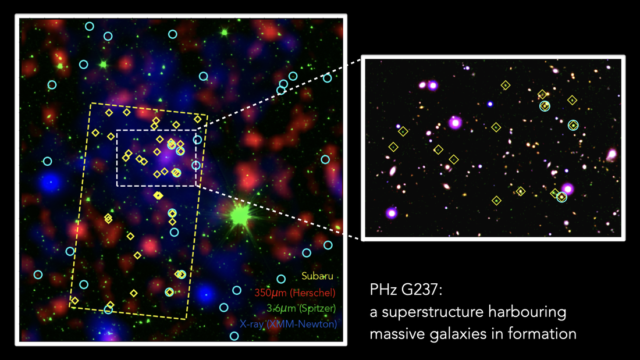 Astronomers Discover Massive Galaxy ‘Shipyard’ in the Distant Universe
Astronomers have discovered a structure thought to be a “protocluster” of galaxies on its way to developing into a galaxy supercluster. Observations show the protocluster, which is located 11 billion light-years from Earth, as it appeared when the universe was 3 billion years old, when stars were produced at higher rates in certain regions of the cosmos.
Today
Daniel Stolte, University Communications and Brenda Frye, Steward Observatory


Even galaxies don’t like to be alone. While astronomers have known for a while that galaxies tend to congregate in groups and clusters, the process of going from formation to friend groups has remained an open question in cosmology.

In a paper published in the journal Astronomy & Astrophysics, an international team of astronomers reports the discovery of a group of objects that appear to be an emerging accumulation of galaxies in the making – known as a protocluster.

“This discovery is an important step toward reaching our ultimate goal: understanding the assembly of galaxy clusters, the most massive structures that exist in the universe,” said Brenda Frye, an associate professor of astronomy at the University of Arizona’s Steward Observatory and a co-author of the study.

The Milky Way, home to our solar system, belongs to a galaxy cluster known as the Local Group, which is part of the Virgo supercluster. But what did a supercluster such as Virgo look like 11 billion years ago?

“We still know very little about protoclusters, in part because they are so faint, too faint to be detected by optical light,” Frye said. “At the same time, they are known to radiate brightly in other wavelengths such as the sub-millimeter.”

Initially discovered by the European Space Agency’s Planck telescope as part of an all-sky survey, the protocluster described in the new paper showed up prominently in the far-infrared region of the electromagnetic spectrum. Sifting through a sample of more than 2,000 structures that could be in the process of becoming clusters, researchers came across a protocluster designated as PHz G237.01+42.50, or G237 for short. The observations looked promising, but to confirm its identity required follow-up observations with other telescopes.

Led by Mari Polletta at the National Institute for Astrophysics in Milan, Italy, the team conducted observations using the combined power of the Large Binocular Telescope in Arizona, which is managed by UArizona, and the Subaru Telescope in Japan. The team identified 63 galaxies belonging to the G237 protocluster. The original discovery was published in a previous paper, and follow-up observations were obtained using archival data, the Herschel Space Observatory and the Spitzer Space Telescope.

“You can think of galaxy protoclusters such as G237 as a galaxy shipyard in which massive galaxies are being assembled, only this structure existed at a time when the universe was 3 billion years old,” Frye said. “At the same time, the genealogy may be closer than you think. Because the universe is homogeneous and the same in all directions, we think that the Milky Way may have docked at a protocluster node similar to G237 when it was very young.”

A simulation of the cosmic web – a vast, three-dimensional “spider web” of gas filaments crisscrossing in the cosmos. Rather than being randomly distributed, galaxies tend to cluster at the nodes of the cosmic web, depicted by the red regions, forming protoclusters such as G237.
International Gemini Observatory-NOIRLab-NSF-AURA-G. L. Bryan-M. L. Norman

At first, observations of G237 implied a total star formation rate that was unrealistically high, and the team struggled to make sense of the data. The G237 protocluster seemed to be forming stars at a rate of 10,000 times that of the Milky Way. At that rate, the protocluster would be expected to rapidly use up its stellar fuel and subsequently settle down into a complex system similar to the Virgo supercluster.

“Each of the 63 galaxies discovered so far in G237 was like a star factory in overdrive,” Frye said. “It’s as if the galaxies were working on overtime to the assemble stars. The rate of production was unsustainable. At such a pace, the supply chains are expected to break in the near future, and in a way that permanently shuts down the galaxy shipyard.”

Such high yields could only be maintained by a continuous injection of fuel, which for stars is hydrogen gas. Frye said that would require an efficient and unbroken supply chain that drew in unreasonably large amounts of fresh gas to fuel the star-forming factories.

“We don’t know where that gas was coming from,” she said.

Later, the team discovered that some of what it was seeing came from galaxies unrelated to the protocluster, but even after the irrelevant observations were removed, the total star formation rate remained high, at least 1,000 solar masses per year, according to Polletta. In comparison, the Milky Way produces about one solar mass each year.

“The picture we have pieced together now is that of a successful galaxy shipyard, which is working at high efficiency to assemble galaxies and the stars within them and has an energy supply that is more sustainable,” Frye said.

All galaxies in the universe are part of a giant structure that resembles a three-dimensional spider web shape called the cosmic web. The filaments of the cosmic web intersect at the nodes, which equate to the galaxy shipyards in the analogy.

“We believe that the filaments mediate the transfer of hydrogen gas from the diffuse medium of intergalactic space onto these hungry, newly forming protocluster structures in the nodes,” Frye said.

Pointing to future research, Polletta said: “We are in the process of analyzing more observations on this and other Planck protoclusters with the goal of tracing the gas that gives birth to these newly forming stars and feeds the supermassive black holes, to determine its origin and explain the observed extraordinary activity.”

Frye said she is looking forward to combining data from the Large Binocular Telescope with observations from NASA’s the James Webb Space Telescope, to be launched in December.

“Protoclusters offer an opportunity to investigate key questions in astronomy that only this new observatory can answer,” she said, “such as what mechanisms drive the prodigious star formation, and when will the hydrogen supply run out, forcing this galaxy shipyard to close its doors and turn into a supercluster similar to the one our Milky Way is in?”