Last year, scientists demonstrated that twisted bilayer graphene—a material made of two atom-thin sheets of carbon with a slight twist—can exhibit alternating superconducting and insulating regions. Now, a new study in the journal Nature by scientists from Spain, the U.S., China and Japan shows that superconductivity can be turned on or off with a small voltage change, increasing its usefulness for electronic devices.

“It’s kind of a holy grail of physics to create a material that has superconductivity at room temperature,” University of Texas at Austin physicist Allan MacDonald said. “So that’s part of the motivation of this work: to understand high-temperature superconductivity better.”

The discovery is a significant advance in an emerging field called Twistronics, whose pioneers include MacDonald and engineer Emanuel Tutuc, also from The University of Texas at Austin. It took several years of hard work by researchers around the world to turn MacDonald’s original insight into materials with these strange properties, but it was worth the wait.

In 2011, MacDonald, a theoretical physicist who uses quantum mathematics and computer modeling to study two-dimensional materials, made an unexpected discovery. Along with Rafi Bistritzer, a postdoctoral researcher, he was working on building simple but accurate models of how electrons behave in stacked 2-D materials—materials one atom thick—when one layer is slightly twisted relative to the others. The seemingly un-computable problem, MacDonald believed, could be greatly simplified by focusing on one key parameter of the system.

If physics is your field of interest, you can find more articles and news on our physics related page.

The strategy MacDonald and Bistritzer employed proved successful. The surprise came later. When they applied their method to twisted bilayer graphene, a system consisting of two layers of carbon atoms, they found that at a very specific angle of about 1.1 degrees—which they dubbed the “magic angle”—the electrons behaved in a strange and extraordinary way, suddenly moving more than 100 times more slowly.

Why this was the case and what it would mean for science would take years to discover.

In the short term, the finding was largely ignored or dismissed. The result seemed too unusual to believe. Moreover, it was not obvious that creating a physical example of such a system, with such a precise placement of the two-dimensional sheets, was physically achievable.

But not everyone was incredulous or intimidated by the results. A few experimentalists around the world took note of the prediction published in the Proceedings of the National Academy of Sciences and chose to pursue the “magic angle.” When in 2018, for the first time, physicists at the Massachusetts Institute of Technology created a system of layered graphene twisted by 1.1 degrees, they found, as MacDonald had predicted, that it exhibited remarkable properties—in particular, superconductivity at a surprisingly high temperature.

“There’s no simple explanation for why electrons suddenly slow down,” MacDonald said. “Thanks to recent work by theorists at Harvard, there’s now a partial explanation related to models often studied in elementary particle physics. But there’s now a whole world of related effects in different layered 2-D materials. Twisted bilayer graphene is just a peek into one part of it.”

Superconducting materials have no electrical resistance, allowing electrons to travel endlessly without dissipating energy. They are used in quantum computing and could be game changers for electrical transmission if they did not require expensive refrigeration.

First discovered in 1911, superconductivity has been documented in a number of materials. However, they all require extremely low temperatures to maintain their distinctive characteristics. The emergence of stacked 2-D materials may change this.

The discovery of superconductivity in twisted bilayer graphene has since provided fuel for a flourishing subfield with a catchy name—Twistronics—and a rush to develop the technology further.Play00:0000:59SettingsPIPEnter fullscreenPlayThis video shows how the idea for twistronics was first developed, how “magic angle” graphen spawns superconductivity and possible applications. Credit: David Steadman/University of Texas at Austin

A decade of dedicated study

Ever since the discovery of graphene by Andre Geim and Konstantin Novoselov at the University of Manchester in 2004 (which ultimately led to a Nobel Prize in physics in 2010), MacDonald has been fascinated with these strange, two-dimensional systems and the new physics they may contain.

He began studying the material almost immediately and, since 2004, has used supercomputers at the Texas Advanced Computing Center (TACC) to explore the electronic structure of graphene and other 2-D materials.

“My work is all about predicting unusual phenomena that haven’t been seen before, or trying to understand phenomena that are not well understood,” MacDonald said. “I’m drawn to theory that connects directly to things that actually happen, and I’m interested in the power of math and theory to describe the real world.”

The strange properties of layered 2-D materials seems to relate to interactions, which become much more crucial when electrons slow down, inducing strong correlations between individual electrons. Typically, electrons circle nearly separately around the nucleus in atomic orbitals, settling into quantum states with the lowest available energies. This does not seem to be the case in magic angle graphene.

“Basically, nothing much interesting can happen when the electrons organize themselves the way they do in an atom by occupying the lowest energy orbitals,” MacDonald said. “But once their fate is determined by interactions between the electrons, then interesting things can happen.”

How does one even go about studying what happens in layered 2-D systems—known, technically, as van der Waals heterostructures? “Seeing” electrons in motion is next to impossible. Measurements provide clues, but the results are oblique and frequently counterintuitive. Computer models, MacDonald believes, can help add to the emerging picture of confined electrons.

Computer models that represent classical electronic structure are well developed and highly accurate in most cases, but they need to be adjusted in the face of the weird physics of heterojunctions.

Altering these factors means rewriting the prevailing model to mirror the behavior of strongly interacting electrons, a task that MacDonald and researchers in his lab are currently working on, using TACC’s Stampede2 supercomputer—one of the most powerful in the world—to test models and run simulations. Moreover, ever-larger numbers of electrons must be included in order to accurately replicate the results that are emerging from labs around the world.

“The real system has billions of electrons,” MacDonald explained. “As you increase the number of electrons, you quickly exceed the capability of any computer. So, one of the approaches we’re using, in work led by Pawel Potasz—a visitor from Poland—is to solve the electronic problem for small numbers of electrons and extrapolate the behavior to large numbers.”

While working to redesign electronic structure models and scale them to ever-greater numbers of electrons, MacDonald still finds time to collaborate with experimental groups around the world, adding his theoretical and computational insights to their findings.

For years after the discovery of magic angle, practical difficulties in creating pure forms of layered 2-D materials with precise angles of rotation limited the field. But in 2016, another UT researcher, Emanuel Tutuc, and his graduate student, Kyounghwan Kim, developed a reliable method for creating such systems, not only using graphene, but of a number of different 2-D materials.

“The breakthrough really was a technique that my student introduced, which consists of taking a large layer, splitting it into two and taking one segment and putting it on top of the other one,” Tutuc said.

The reason that had not been implemented before is that it is very difficult to pick up a micron-size piece of atom-thick material. Kim invented a sticky, hemispherical handle that can lift up an individual flake, leaving everything else in its proximity intact.

“Once that was done, the possibilities became endless,” he continued. “Not long after, the same student said, ‘OK, now that we can align them with the really high accuracy, let’s go ahead and twist them.’ So that was the next step.”

In recent years, MacDonald and his team have explored stacks of three, four or five layers of graphene, as well as other promising materials, particularly transition metal chalcogenides, searching for unusual—and potentially useful—phenomena.

Excitons are quasiparticles that consist of an electron and a hole that attract and hold each other in place. These usually exist within a single layer. However, with certain 2-D materials, it is possible for them to exist on different layers, which greatly increases the length of time they exist. This may enable superfluidity, the unimpeded flow of liquids—a property previously seen only in liquid helium.

Now, MacDonald and a team from Spain, China and Japan have published a study in Nature of magic angle graphene that showed the material can exhibit alternating superconducting and insulating phases that can be turned on or off with a small voltage change, similar to the voltages used in integrated circuits, increasing its usefulness for electronic devices. To achieve this result, team members from the Catalan Institute for Optical Physics produced graphene superlattices with more uniform twists than previously possible. In so doing, they discovered that the pattern of interleaved insulating and superconducting states is even more intricate than predicted.

TACC supercomputers are a critical tool in MacDonald’s research and were used for the theoretical modeling of the data in the recent Nature paper.

Though the results of computational experiments may seem less immediate or “real” than those in a lab, as MacDonald has shown, the results can expose new avenues of exploration and help illuminate the mysteries of the universe.

“The thing that’s energized my work is that nature is always posing new problems. And when you ask a new type of question, you don’t know in advance what the answer is,” MacDonald said. “Research is an adventure, a community adventure, a collective random walk, by which knowledge moves forward.”

Provided by: University of Texas at Austin

Physicists reveal how motion can be generated by frustration 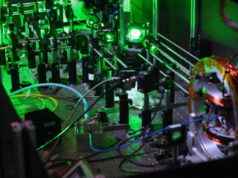