A group of researchers led by Sir Andre Geim and Dr Alexey Berdyugin at The University of Manchester have discovered and characterised a new family of quasiparticles named ‘Brown-Zak fermions’ in graphene-based superlattices.

The team achieved this breakthrough by aligning the atomic lattice of a graphene layer to that of an insulating boron nitride sheet, dramatically changing the properties of the graphene sheet.

The study follows years of successive advances in graphene-boron nitride superlattices which allowed the observation of a fractal pattern known as the Hofstadter’s butterfly — and today (Friday, November 13) the researchers report another highly surprising behaviour of particles in such structures under applied magnetic field.

“It is well known, that in zero magnetic field, electrons move in straight trajectories and if you apply a magnetic field they start to bend and move in circles,” explain Julien Barrier and Dr Piranavan Kumaravadivel, who carried out the experimental work.

“In a graphene layer which has been aligned with the boron nitride, electrons also start to bend — but if you set the magnetic field at specific values, the electrons move in straight line trajectories again, as if there is no magnetic field anymore!”

As published in Nature Communications, the work describes how electrons behave in an ultra-high-quality superlattice of graphene with a revised framework for the fractal features of the Hofstadter’s butterfly. Fundamental improvements in graphene device fabrication and measurement techniques in the past decade have made this work possible.

“The concept of quasiparticles is arguably one of the most important in condensed matter physics and quantum many-body systems. It was introduced by the theoretical physicist Lev Landau in the 1940s to depict collective effects as a ‘one particle excitation’,” explains Julien Barrier “They are used in a number of complex systems to account for many-body effects.”

Until now, the behaviour of collective electrons in graphene superlattices were thought in terms of the Dirac fermion, a quasiparticle that has unique properties resembling photons (particles with no mass), that replicate at high magnetic fields. However, this did not account for some experimental features, like the additional degeneracy of the states, nor did it match the finite mass of the quasiparticle in this state.

The authors propose ‘Brown-Zak fermions’ to be the family of quasiparticles existing in superlattices under high magnetic field. This is characterised by a new quantum number that can directly be measured. Interestingly, working at lower temperatures allowed them to lift the degeneracy with exchange interactions at ultra-low temperatures.

“Under the presence of a magnetic field, electrons in graphene start rotating with quantised orbits. For Brown-Zak fermions, we managed to restore a straight trajectory of tens of micrometres under high magnetic fields up to 16T (500,000 times earth’s magnetic field). Under specific conditions, the ballistic quasiparticles feel no effective magnetic field,” explain Dr Kumaravadivel and Dr Berdyugin.

In an electronic system, the mobility is defined as the capacity for a particle to travel upon the application of an electrical current. High mobilities have long been the Holy Grail when fabricating 2D systems such as graphene because such materials would present additional properties (integer and fractional quantum hall effects), and potentially allow the creation of ultra-high frequency transistors, the components at the heart of a computer processor.

“For this study we prepared graphene devices that are extra-large with a very high level of purity.” says Dr Kumaravadivel. This allowed us to achieve mobilities of several millions of cm²/Vs, which means particles would travel straight across the entire device without scattering. Importantly, this was not only the case for classical Dirac fermions in graphene, but also realised for the Brown-Zak fermions reported in the work.

These Brown-Zak fermions define new metallic states, that are generic to any superlattice system, not just graphene and offers a playground for new condensed matter physics problems in other 2D material based superlattices.

Julien Barrier added “The findings are important, of course for fundamental studies in electron transport, but we believe that understanding quasiparticles in novel superlattice devices under high magnetic fields can lead to the development of new electronic devices.”

The high mobility means that a transistor made from such a device could operate at higher frequencies, allowing a processor made out of this material to perform more calculations per unit of time, resulting in a faster computer. Applying a magnetic field would usually scale down the mobility and make such a device unusable for certain applications. The high mobilities of Brown-Zak fermions at high magnetic fields open a new perspective for electronic devices operating under extreme conditions.

Provided by: University of Manchester 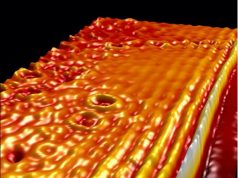 Every fall more than half of the coho salmon that

A team of Johns Hopkins University researchers has

To meet the most ambitious 1.5º C climate goal re

Researchers at ETH Zurich have identified a self-r

Human fingerprints have a self-regulating moisture

In a study published this week in The Cryosphere,

The validation and application of theories in phys

Thousands of years ago, people in South America be

While the broad architecture and organization of t

If songbirds could appear on "The Masked Singer" r

Titanium atom that exists in two places at once in crystal...