Science is based on facts that are established by independent observations agreed by everyone.

But scientists at Heriot-Watt University’s Mostly Quantum Lab have now shown that, in the quantum world, facts may depend on who observes them.

Imagine tossing a coin. A quantum coin can exist in a superposition of both ‘heads’ and ‘tails’, until a definite outcome ‘heads’ or ‘tails’ is observed, which is considered a fact.

In the 1960s, the renowned scientist, Eugene Wigner, proposed an intriguing thought experiment. An observer, Wigner’s friend, tosses a quantum coin inside a closed laboratory, observing as a fact one of the two outcomes. From the outside, we cannot tell what happened, and the rules of quantum mechanics allow us to describe both friend and coin as one single system.

Massimiliano Proietti, lead author of the study and PhD student at Heriot-Watt, said, “From outside the laboratory, Wigner’s friend and the coin become “entangled”, which means they are in a superposition where both outcomes, ‘heads’ and ‘tails’ are still present — a fact that can be established by the outside observer. This brings about a paradoxical situation where the fact established inside the laboratory seemingly contradicts the fact observed on the outside.”

To test this prediction, Heriot-Watt’s team conducted a quantum test that involves four observers implemented on a small photonic quantum computer. In an experiment involving six entangled light particles Proietti and colleagues showed that, under some assumptions, the inside and outside observers really cannot agree on what happened in the experiment.

Lab leader Professor Alessandro Fedrizzi, adds: “The insight we gained is that quantum observers may indeed be entitled to their own facts. If we insist that this shouldn’t be the case for ‘classical’ human observers, the challenge now is to pin down where the two domains depart from each other. It may for example hint at quantum mechanics not being applicable to big, everyday objects—something that is allowed by textbook quantum physics.”

Their findings were published today in the scientific journal, Science Advances.

Image: Fig. 1 Wigner’s friend experiment.(A) A quantum system in an equal superposition of two possible states is measured by Wigner’s friend (inside the box). According to quantum theory, in each run, she will randomly obtain one of two possible measurement outcomes. This can be verified by directly looking into her laboratory and reading which result she recorded. (B) From outside the closed laboratory, however, Wigner must describe his friend and her quantum system as a joint entangled state. Wigner can also verify this state assignment through an interference experiment, concluding that his friend cannot have seen a definite outcome in the first place. (C) We consider an extended version of that experiment, where an entangled state is sent to two different laboratories, each involving an experimenter and their friend.
Credit: DOI: 10.1126/sciadv.aaw9832 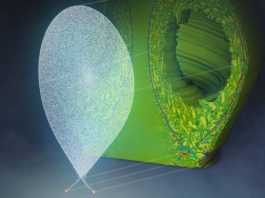 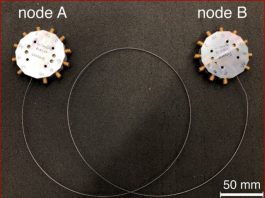 Researchers send entangled qubit states through a communication channel for the... 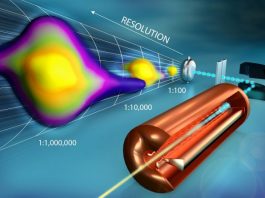 After 20 years, physicists find a way to keep track of...