Magnetism offers new ways to create more powerful and energy-efficient computers, but the realization of magnetic computing on the nanoscale is a challenging task. A critical advancement in the field of ultralow power computation using magnetic waves is reported by a joint team from Kaiserslautern, Jena and Vienna in the journal Nano Letters.

A local disturbance in the magnetic order of a magnet can propagate across a material in the form of a wave. These waves are known as spin waves and their associated quasi-particles are called magnons. Scientists from the Technische Universität Kaiserslautern, Innovent e.V. Jena and the University of Vienna are known for their expertise in the research field called ‘magnonics,’ which utilizes magnons for the development of novel types of computers, potentially complementing the conventional electron-based processors used nowadays.

“A new generation of computers using magnons could be more powerful and, above all, consume less energy. One major prerequisite is that we are able to fabricate, so-called single-mode waveguides, which enable us to use advanced wave-based signal processing schemes,” says Junior Professor Philipp Pirro, one of the leading scientists of the project. “This requires pushing the sizes of our structures into the nanometer range. The development of such conduits opens, for example, an access to the development of neuromorphic computing systems inspired by the functionalities of the human brain.”

However, the downscaling of magnonic technology to the nanoscale is challenging: “A very promising material for magnonic applications is Yttrium Iron Garnet (YIG). YIG is a kind of ‘noble magnetic material’ since magnons live in it around hundred times longer than in other materials,” says Professor Andrii Chumak of the University of Vienna, the project leader. “But everything has its price: YIG is very complex and hard to handle if you try to make tiny structures out of it. That is why YIG structures had millimeter sizes for decades, and only now have we managed to move down to 50 nanometers, which is around 100,000 times smaller.”

For this, a special new technology was developed at the Nano Structuring Center of the Technische Universität Kaiserslautern using YIG films grown by collaborator Dr. Carsten Dubs from Innovent e.V. from Jena. A thin metal layer, called a mask, is fabricated on top of the YIG, leaving the majority of the film exposed. Then the sample is bombarded by a powerful flow of argon ions, which removes the unprotected parts of YIG, while the material below the mask remains untouched. Afterwards, the metallic mask is removed, revealing a 50nm thin strip of the finished YIG.

“Crucial for the success of the whole process was to find the proper materials for the mask, to find out what should be its thickness and to tune tens of different parameters in order to save the properties of YIG,” says Björn Heinz, the lead author of the paper. “After several years of investigations, we finally found what we were searching for in the combination of chromium and titanium layers.”

The width of the YIG structure is about one thousand times smaller than the thickness of a human hair. After the successful structuring, the scientists continued to study the propagation of magnons to evaluate if the nano-sized YIG structures kept the superior material properties of the YIG films.

“We were able to show that the structuring process had only a minor impact on the fantastic properties of this material,” Heinz says. “Moreover, we were able to prove experimentally that magnons can efficiently carry information over long distances in the conduits as was predicted theoretically before. These results are a significant milestone in the development of magnonic circuits and prove the general feasibility of magnon-based data processing.”

Image: The left panel shows a micrograph of a 50 nm wide YIG waveguide. The antenna allows for the excitation of spin waves which then propagate along the stripe. The right panel shows a zoomed in section of the waveguide and compares its size to the one of the corona virus.
Credit: TUK / Nano Structuring Center 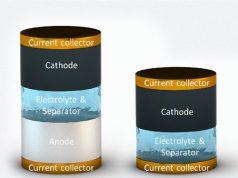