Home Picture Growing pains in a cluster of protostars

Astronomers using ALMA have imaged the episodic outflow of a young protostar known as CARMA-7. The twin jets — each nearly 1.5 trillion kilometers long — have distinct gaps, revealing that the star is growing by fits and starts.
Credit: B. Saxton (NRAO/AUI/NSF); A. Plunkett et al.; ALMA (NRAO/ESO/NAOJ)

A Yale-led study has found a cluster of young stars that develop in distinct, episodic spurts.

It is the first time astronomers have seen such a growth pattern within a star cluster — a chaotic, turbulent environment that is common for star formation. Previous observations have focused on stars forming in more isolated regions of space.

In a study published this week in the journal Nature, astronomers described the cosmic convulsions within Serpens South, a star cluster 1,400 light years from Earth. The researchers focused in particular on a protostar called CARMA-7.

The researchers recorded 22 “episodes” in which CARMA-7 experienced the gravitational push-pull that characterizes star formation. As protostars ingest raw material, they have counter-balancing emissions of material they don’t need. Such “outflow” is important to researchers because it can be measured more easily, unlike the hard-to-detect incoming matter.

“Outflows are very common in astrophysics,” said co-author Héctor Arce, an astronomy professor at Yale whose research group focuses on outflow dynamics. “They are good indicators of protostars, evolved stars, and even supermassive black holes. They tell us that there is a central, massive object in the outflow origin, with a surrounding accretion disc.”

The first author of the paper is Adele Plunkett, a recent Yale graduate student now working with the European Southern Observatory (ESO) in Santiago, Chile. Plunkett and her colleagues used data from the Atacama Large Millimeter/sub-millimeter Array (ALMA) in Chile to conduct the research.

“This is the beginning of being able to understand cluster regions,” Plunkett said. “In the past, we only saw cumulative outflows. To be able to observe individual outflows, with distinct ejection events, was exciting — and something we could only do with ALMA.”

Plunkett said the technology allows researchers to determine details about the star formation process, such as how often material is accreted or ejected, on time scales of a few hundred years. Further observation promises an even greater level of detail about protostars in their most common environment, said the researchers.

“This result shows that when young stars grow they do so episodically, in little growth spurts, rather than steadily,” said co-author Pieter van Dokkum, the Sol Goldman Professor of Astronomy and chair of Yale’s Department of Astronomy. “They’ve learned to chew their food before they swallow.”

The other co-authors of the paper are Diego Mardones of the Universidad de Chile, Michael Dunham of the Harvard-Smithsonian Center for Astrophysics, Manuel Fernández-López of Instituto Argentino de Radioastronomía, and José Gallardo and Stuartt Corder of the Joint ALMA Observatory. 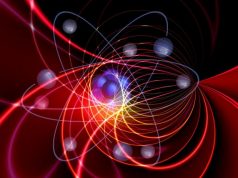