A new international study led by Aarhus University in Denmark, in collaboration with the Universities of St Andrews and La Laguna, Tenerife, reveals how whales have evolved to live in the world’s deepest oceans.

Many whales and dolphins, including the champion deep-diving beaked whales, use echolocation, the ability to locate objects by reflected sound, to find food in the dark of the deep ocean. Scientists have not been able to agree on how much energy this remarkable sensing ability takes, until now.

A new study published today (Thursday 31 October) in the journal Scientific Reports reveals that, at least for short-finned pilot whales, echolocation is cheap. This may help explain how echolocating whales evolved to live in deep waters throughout the world.

In a throwback to terrestrial ancestors, whales use air to make their intense echolocation click sounds and this raises a problem for deep divers. Air compresses with depth so that at 700m deep, where pilot whales hunt, a lung-full of air has shrunk to 1.5% of its volume. But the new study shows that pilot whales use tiny amounts of air to make each click so this volume goes a long way. Even so, whales need to capture the air used by each click and recycle it, like a SCUBA rebreather, to be able to echolocate throughout their dives.

Lead author Ilias Foskolos, a doctorate student at Aarhus University in Denmark, said: “How whales manage to keep echolocating in deep dives has been a long-standing mystery. These are wild oceanic predators that are really difficult to study.”

To rise to this challenge, the international team attached miniature computers to whales with suction cups to record the close-in sound of the echolocation clicks.

Dr. Mark Johnson, a researcher at the Sea Mammal Research Unit at the University of St Andrews, commented: “There was a eureka moment when we realized that the sound of each click changes gradually as whales echolocate depending on how much air is used.”

Professor Peter Madsen from the Department of Bioscience at Aarhus University added: “This meant that we could measure for the first time just how little air whales use to make each click. Even though these whales can detect prey at tens or even hundreds of meters, the small air volumes mean that echolocation doesn’t take much energy.”

To study deep-diving pilot whales, the team went to Tenerife in the Canary Islands. Dr. Natacha Aguilar de Soto of the University of La Laguna, a co-author on the paper, said: “This study gives us a glimpse of the incredible evolutionary developments that allow pilot whales to hunt efficiently in the dark. But their reliance on sound makes them vulnerable to the noise from boats that we are adding to the ocean.”

Provided by: University of St Andrews 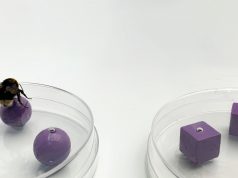