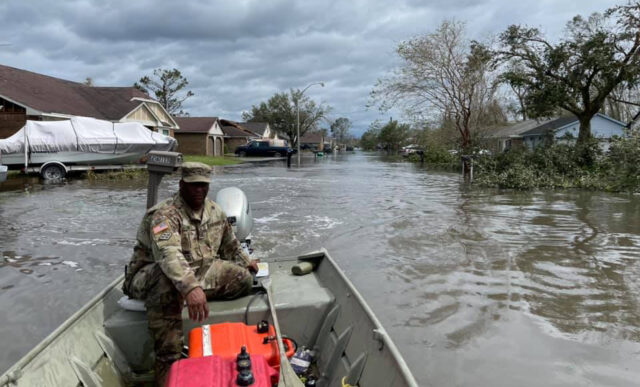 New Research on Tropical Cyclone Extremes Could Aid in Disaster Planning
Hurricanes and tropical storms are slowing down and dumping more water in the process. At-risk communities could use research to prepare for future disasters.
Mikayla Mace Kelley
Today
University Communications


Increases in tropical cyclone precipitation extremes, which make hurricanes and tropical storms more hazardous, could help communities be more prepared for high amounts of rainfall like what Hurricane Ida recently produced in parts of the United States, a new study finds.

“We used tree rings in longleaf pines to reconstruct the amount of tropical cyclone precipitation in the Carolinas over more than 300 years,” said Valerie Trouet, a dendrochronology professor in the University of Arizona Laboratory of Tree Ring Research and co-author of the study, published in Proceedings of the National Academy of Sciences. “We found that extreme amounts of tropical cyclone precipitation have become more extreme over this period and specifically over the past 60 years.”

This is in line with the hypothesis that tropical cyclones are moving slower and leaving behind more water under human-driven climate change, Trouet said.

“For those that are in regions that are impacted by hurricanes, having an understanding that these storms are getting wetter can help coastal communities to better prepare for flooding,” Trouet said. “Our research brings attention to a lesser known – but one of the deadliest – hazards of hurricanes: inland flooding. While wind speeds and storm surges are important hazards, inland flooding often impacts a larger area and should be taken just as seriously as the other hazards.”

For example, Hurricane Ida hit states along the Gulf of Mexico in late August and then moved up the northeastern coast of the U.S., causing flooding that resulted in more than 100 deaths and billions of dollars in damages. However, scientific understanding of the impacts and potential trends of flooding is limited by relatively brief tropical cyclone precipitation records from weather stations, which date back to only 1948, according to the study’s authors.

“The key takeaway is that this increase is only seen in the wettest storms,” said lead study author Justin Maxwell, an associate professor at Indiana University Bloomington. “So, take the recent hurricanes Nicholas or Ida, for example, which produced maximum rainfall of about 14 inches and 11 inches. If these storms occurred in the early 1700s, they would have produced 2.5 to 5 inches less rainfall. Having an additional 2.5 to 5 inches for today’s wettest storms make them much more hazardous, as that amount of rainfall by itself can cause localized flooding. Adding those totals on top of 9 to 10 inches of rain over a widespread area can lead to large flooding, especially in coastal cities that have a lot of impervious surfaces, so there is nowhere for the water to go.”

Having an understanding about increasing precipitation extremes caused by tropical cyclones can benefit for communities that must anticipate and plan for these types of storms, according to the study’s authors.

Life on LEO: Plants to be Added to the Landscape Evolution...

© Copyright 2021 Science Bulletin
Go to mobile version
We use cookies to ensure that we give you the best experience on our website. If you continue to use this site we will assume that you are happy with it.Ok