The world’s fastest land animal, the cheetah, is a successful hunter not only because it is quick, but also because it can hold an incredibly still gaze while pursuing prey. For the first time, researchers have investigated the cheetah’s extraordinary sensory abilities by analyzing the speedy animal’s inner ear, an organ that is essential for maintaining body balance and adapting head posture during movement in most vertebrates. The study, published today in the journal Scientific Reports and led by researchers at the American Museum of Natural History, finds that the inner ear of modern cheetahs is unique and likely evolved relatively recently.

“If you watch a cheetah run in slow motion, you’ll see incredible feats of movement: its legs, its back, its muscles all move with such coordinated power. But its head hardly moves at all,” said lead author Camille Grohé, who conducted this work during a National Science Foundation and Frick Postdoctoral Fellowship in the Museum’s Division of Paleontology. “The inner ear facilitates the cheetah’s remarkable ability to maintain visual and postural stability while running and capturing prey at speeds of up to 65 miles per hour. Until now, no one has investigated the inner ear’s role in this incredible hunting specialization.”

In the inner ear of vertebrates, the balance system consists of three semicircular canals that contain fluid and sensory hair cells that detect movement of the head. Each of the semicircular canals is positioned at a different angle and is especially sensitive to different movements: up and down, side-to-side, and tilting from one side to the other.

The researchers used high-resolution X-ray computed tomography (CT) at the Museum’s Microscopy and Imaging Facility, the National Museum of Natural History in Paris, and the Biomaterials Science Center of the University of Basel in Switzerland to scan the skulls of 21 felid specimens, including seven modern cheetahs (Acinonyx jubatus) from distinct populations, a closely related extinct cheetah (Acinonyx pardinensis) that lived in the Pleistocene between about 2.6 million and 126,000 years ago, and more than a dozen other living felid species. With those data, they created detailed 3-D virtual images of each species’ inner ear shape and dimensions.

They found that the inner ears of living cheetahs differ markedly from those of all other felids alive today, with a greater overall volume of the vestibular system and longer anterior and posterior semicircular canals.

“This distinctive inner ear anatomy reflects enhanced sensitivity and more rapid responses to head motions, explaining the cheetah’s extraordinary ability to maintain visual stability and to keep their gaze locked in on prey even during incredibly high-speed hunting,” said coauthor John Flynn, the Frick Curator of Fossil Mammals in the Museum’s Division of Paleontology.

These traits were not present in Acinonyx pardinensis, the extinct species examined by the researchers, emphasizing the recent evolution of the highly specialized inner ear of modern cheetah.

“By using high-tech equipment to look deep inside the skulls of modern and fossil cat species, we have discovered that there was a decoupling of locomotor and sensory system adaptations to high-speed predation in the cheetah lineage ,” Grohé said. “The competition with other predators, notably large pantherines and sabertooth cats, has probably constrained the cheetah to evolve a high-speed hunting strategy. The living cheetah’s ancestors have evolved slender bones that would allow them to run very fast and then an inner ear ultra sensitive to head movements to hold their head still, enabling them to run even faster.”

Image:
This illustration shows the location of the inner ear in a modern cheetah skull.
Credit: © AMNH/N. Wong 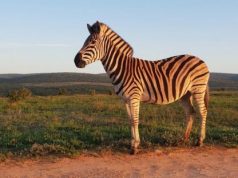 Conservation paradox: The pros and cons of recreational hunting

The first global-scale assessment of the role ecos

Robotic laboratories on the bottom of Lake Erie ha

Even in the world of the smallest particles with t

Duke researchers have been studying something that